In current computer operating systems, surprisingly, only a small percentage of application code loaded in main memory is actually active. Most processes are idle, yet in aggregate, they take up a lot of expensive DRAM main memory space. Due to the way these computing systems are architected, the main memory doesn’t know when to load or unload snippets of codes in its applications. Marvell’s Final-Level Cache (FLC™) architecture solves this issue by redefining the main memory hierarchy, automatically loading pieces of code as needed and purging unneeded code, freeing up space for other applications.

Cutting the amount of DRAM main memory needed in a system and replacing it with a small layer of high-speed DRAM cache and an inexpensive solid-state drive (SSD) main memory has the potential to spark the development of lower cost and lower power products. FLC architecture cuts the DRAM needed in a system by as much as a factor of ten, enabling computing systems to use about half the energy they consume today 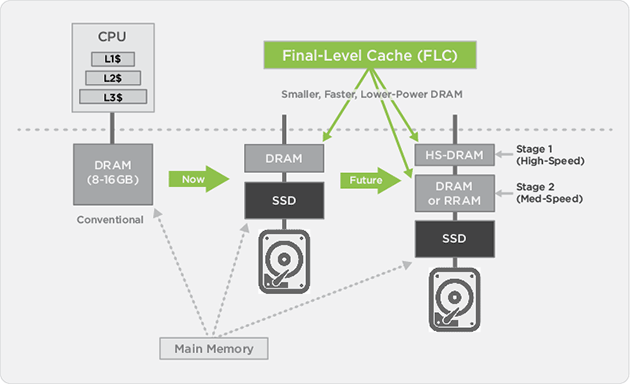 FLC technology is ideal for almost all computing devices including smartphones, tablets, laptops, servers, wearables, Internet of Things devices, and storage devices. For example, FLC technology can enable the development of the industry’s thinnest, lowest cost ultra book at only half the operating power. It also holds the potential to decrease battery size or increase standby battery life at half the cost of today’s offerings.

Learn how FLC™ redefines main memory hierarchy cutting the DRAM needed in a system by as much as a factor of ten.

FLC and MoChi: The Future of IC Design